The table is now completely constructed and ready for finishing. I had done a pretty good job to this point keeping things finish sanded as I constructed them so my sanding work was quick and consisted of scraping off and residual glue that was visible. I applied a semi-gloss polyurethane to the base of the table. I wanted to put a varnish on top for increased durability but the rosewood oils reacted with the finsh and it never dried so i had to scrape off that finish. I gave up after a while and just decided to go for a high gloss finish with shellac and the french polish technique. After several days and hours of hand rubbing the result turned out extremely well. Here are the pre and post images. 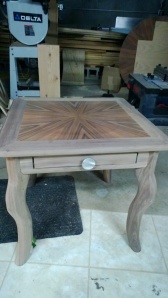 The frame is assembled and glued up. The top is completed. The next step is to cut the drawers and create the slides. I saved the piece I removed from the apron as the drawer front. I want to have this fit in just about where it was so that the grain matches perfectly. It will also be inset. In terms of drawer planning, probably the best and most attractive solution to attach the drawer to the face is through half blind dovetails. These are dovetails that are hidden from the front and mate into the side of the front. I will use clear maple and fit them into the walnut creating a nice contracst and hopefully not highlighting any imperfections that will likely exist since they will be hand cut. I will rabbit in 1/4 in plywood for the base of the drawer to make things simple. The dovetails were all handcut with a lot of the rough work done on a band saw and coping saw and then finished clean with a chisel. The rabbets were then cut for the base and the area for the slide which will be 3/4″ x 1/4″ solid walnut. After the drawer was assembled and cleaned up the slides were fit to the grooves and planed down to flush.

After planing down, I attached a small piece of walnut in the back that would act as a drawer stop to prevent the drawer from pulling out. I screwed it in so I could effectively turn it on or off by rotating the piece around the central screw.

When the drawer is assembled and the slides fit, it is ready for integration into the table. First though is the completion of the table itself. For this task I used pocket screws to attach the top to the underside. I won’t go into the details. The next step is to get the blocks that will hold the rails in place attached to the underside of the table. For this, I used the drawer itself as the guide and placed it as it will be when finished. I marked the base of 2 support sides to the underside of the table and then attached with glue and pocketscrews. After this was steady, I could now use the sides to determine the plane of the drawer. I placed the drawer flush and correctly in the slot in the apron. After ensuring it was both flush with the front and centered, I marked the base of the drawer on the side support and the place where the rails were to be at from the rear and front. I removed the drawer and applied glue to the rails and placed them close to where they were going to be on the sides. After waxing the grooves in the drawer with furiture wax to both avoid glue from sticking and to help it slide in the future, I slid the drawer onto the rails that were tacked in the side with the glue. I moved them to their final position and then pulled out the drawer and clamped in place to hold until the glue dried. After this process was completed I finished up by also waxing the rails.

The next step is to take apart the temporarily assembled frame and finish the fine details of the legs. This was done by first rough cutting a 45 degree bevel from each of the edges of the legs on the bandsaw and then completing the rounding by hand using a rasp. The rule for all woodworking is always remove the biggest pieces possible using a tool as intended but never remove too much. Simple in theory, difficult in practice at least at the beginning. Here is a picture of the rounded legs rasped and sanded to finish level. A rectangular opening was cut in one side of the apron to accommodate the drawer. 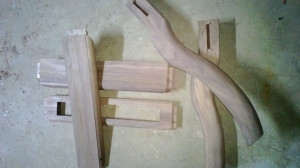 The next step is to assemble the frame and glue up. Obviously, any problems in joining the pieces should have been addressed in the step before when doing the test fit. Glueing up can be stressful so proper preparation is necessary. Get your glue, brush, and protection set up first then pour the glue and work quickly. Make sure to get both sides of the joint to ensure glue is everywhere when you can’t see it anymore inside the joint. A badly glued joint might feel strong but fail catastrophically. After the glue is in and the joints assembled, compress the joints first with a rubber mallet and then with a bar clamp. Measure the diagonals to ensure squareness and place on level floor. Clamp at 90 degrees or cross clamp if perfectly square from the start. In this example, I utilized the inherent tension to provide the cross clamping pressure required.